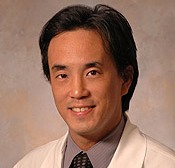 January 13, 2015 – Dr. Elbert Huang was quoted yesterday in a Reuters article entitled “Older diabetics may be pushing blood sugar too low.” The article discussed new evidence from a study conducted by the Yale School of Medicine demonstrating that many patients with diabetes over the age of 65 who have other health concerns may be at risk for achieving blood sugar levels that are too low. The article also mentioned Dr. Huang’s 2011 study findings published in the Journal of the American Geriatrics Society which demonstrated that more than three million older people with diabetes would be eligible for a reduction in medication if their glucose targets were raised. He was asked to comment on the most recent findings out of Yale.